Katayama finally got an extraordinary break. In the fall of 1965 a man named Keiichi Matsumura joined Nissan. He came over from the Ministry of International Trade and Industry, where he had been MITI’s man on automobiles. There was a tradition of this in Japan. A high MITI official, his career completed, would go over into the industry that he had served – the Japanese called it amakudari, “descending from heaven.” In the spring of 1966, Matsumura visited and he and Katayama began a series of conversations about problems the company was having. Katayama knew immediately that this was his best chance to upgrade the engine, so he pushed as hard as he could with Matsumura about the need for the 1600cc. At the end of their first long session Matsumura said, “Write a letter for me, and I will sign it.” Then he changed his mind. “Make it a telex,” he said. “There’s a board meeting coming up soon.” The next day a long, impassioned telex message, which everyone at Nissan knew was from Katayama, went out over Matsumura’s name. Almost immediately Katayama got an angry message from Yuji Shimamoto, who was a key man in the export department. Shimamoto had been his chief tormentor in the past and had strenuously fought him on his repeated requests to upgrade the engine. This time Shimamoto was complaining bitterly and publicly of Katayama’s failure to ask him for the 1600 cc engine any earlier. That night, April 8, 1966, Katayama wrote in his diary: “I do not know how many times I have asked the head office for more [engine] power. In fact l have been begging for it, but we always had to shut up because their answer was that it was impossible. Now Shimamoto tells me that everyone including Kawamata was shocked by Matsumura’s telex. It is we who should be shocked, not him.”

A few days later Kawamata arrived in Los Angeles with his wife. Katayama was nervous that the president might be angry with him, but Kawamata seemed not to mind the telex at all: indeed he affected to take it as a normal request. It was, of course, immediately approved, and the 1600cc engine went into production, which made it ready for the new 1968 model called the 510. It was a remarkable car, in any real sense Yutaka Katayama’s car, a personal victory of exceptional magnitude in any auto company and particularly in a Japanese one. The 510 marked the beginning of the end of the Japanese small car as a clumsy, flimsy econobox. It was the fulfillment in that sense of Katayama’s vision, of taking the best of modern European engineering and marrying it to Japanese manufacturing expertise. 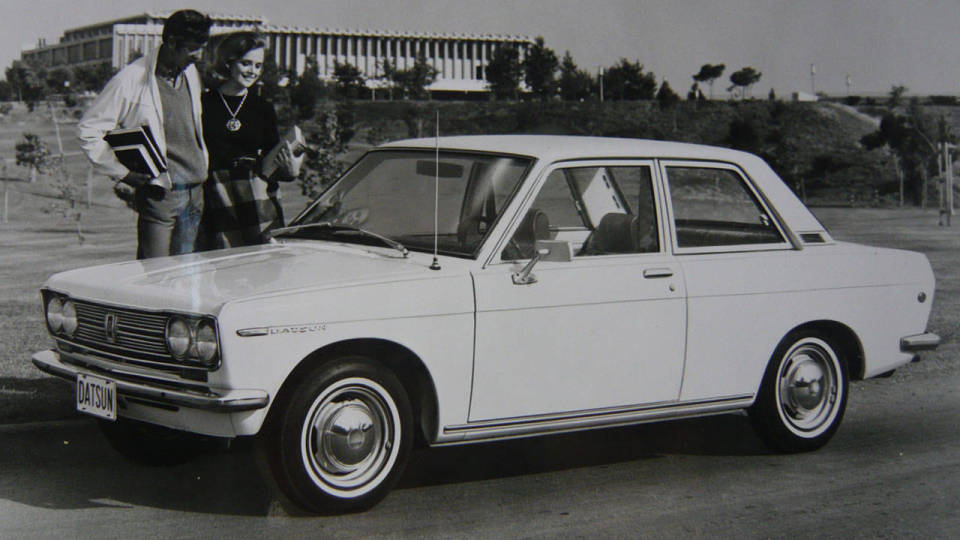 In the months when the car was in its final engineering design, Katayama was on the phone to Japan constantly; one of his American associates thought he was more like an expectant mother than an auto executive. He went sleepless the night before it arrived, and when the ship was finally docking in San Pedro he was more nervous than anyone had ever seen him. As soon as the first one came off the ship, he himself drove it out of the parking facility. “Finally!” he exclaimed to the friend riding next to him. “Finally they did it! I thought it would take ten years, but they did it in seven!” 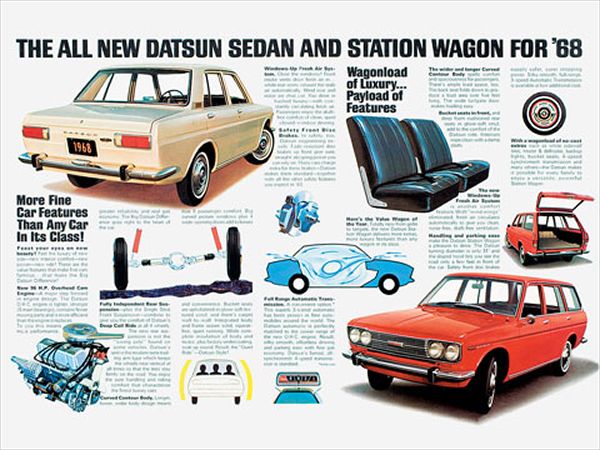 For the first few months he was like a kid with a new toy. He made everyone drive it, first his colleagues at the office, then journalists, then anyone who walked near the showroom. He loved the car, and it was inconceivable to him that anyone who touched it would not be equally excited. In essence, as one high Nissan executive admitted at the time, the 510 was a brilliant knockoff of the BMW 1600, the main difference being that the BMW cost roughly $4,000 and the Nissan 510 about $1,800. The 510 had four-wheel independent suspension, an overhead camshaft, and a 1600 cc engine with 96 horsepower. It was very strong, well put together, fuel efficient. It was almost immediately a hot car. The professional auto magazines were unusually enthusiastic. Car nuts loved the new Datsuns. Dealers could not keep them on the floor, and for a time there were the inevitable charges that some dealers were taking bribes in order to save cars for customers. In Detroit, few of the people at the top of the auto companies took the 510 very seriously, though among the engineering people there was a sudden realization that the Japanese could be more than functional, they could be good.

ln 1971, Datsun jumped into third place among the importers, with 150,000 pieces sold. The 510 alone sold more than 300,000 pieces in five years, and to anyone paying attention it was a sure sign that the Japanese had arrived. It had always been a part of the basic theology of Detroit that it could roll back the foreigners anytime it wanted. The idea had always been that the imports could have 5 percent of the market, nothing more: if the foreigners went above that magic figure, Detroit would strike back. But in 1968 the figure neared 10 percent, with VW getting 54 percent of the total import market. Detroit executives were not really worried, they were making too much money for that. All they had to do whenever they wanted, they assured each other, was tool up some small cars. Soon the Detroit companies were bringing out their new compacts and subcompacts; Ford had the Maverick in 1969 and the ill-fated Pinto in 1970, and GM had the equally ill-fated Vega in 1970. But the import sales did not, as in the past, collapse. What Katayama and others had suspected was becoming true. Bonds of loyalty were being severed. It was no longer, as in the past, just an issue of size and price. The issues now were also quality and integrity.

Next – The oil crisis vaults Datsun to success: How Datsun Discovered America, Part 7