If the first oil shock, after the Yom Kippur War in 1973, enraged and discomfited the Americans, who suddenly had to pay more for gasoline, then it truly frightened the Japanese. For it was not some temporary inconvenience: it was a crisis imperiling their society. The Japanese economy was entirely built upon oil, of which Japan, unlike the United States, had minuscule domestic supplies. What followed was pure panic. There was immediate hoarding of nearly everything, stores were mobbed, and the government had to promise that there would be enough toilet paper for everyone. A quickie book entitled The Oil ls Cut instantly became a best seller. Companies decreed emergency measures to conserve energy; the paint ovens at most of the auto factories, for example, were redesigned so that they needed less heat. Throughout the world of business, faucets in the lavatories produced only cold water. The recovery came slowly. But it soon became clear that Japan was going to be the beneficiary of this crisis. Some Nissan executives claimed it was actually a blessing, because it had badly shaken the younger workers who had taken the company’s success for granted and had become arrogant and spoiled, and it had made them properly grateful for their jobs. Above all, there was now a greater need for smaller, gas-efficient cars. 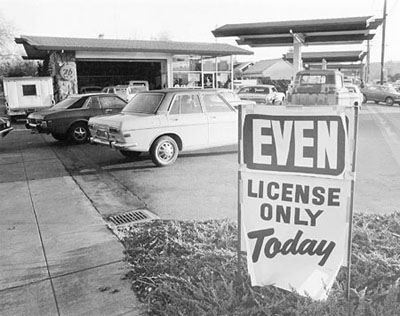 Soon after the Arab embargo began, the people at Nissan found out that the U.S. Environmental Protection Agency had completed its first mileage test and that the Datsun 1200, the company’s smallest car, one that had been around for several years and that the executives were anxious to phase out, had scored the best mileage. John Parker and Maytield Marshall, sensing that a very good commercial might be made from this, took a crew and started filming the 1200 going from California to Maine, where it finally drove up to a lobsterman standing amid a pile of lobster pots. A team of independent authorities went along to check how much gas the 1200 used. The EPA had rated it at thirty-three miles to the gallon; the independent officials certified that on this trip the 1200 had gotten forty. The last line of the commercial was simply: “Datsun Saves.” 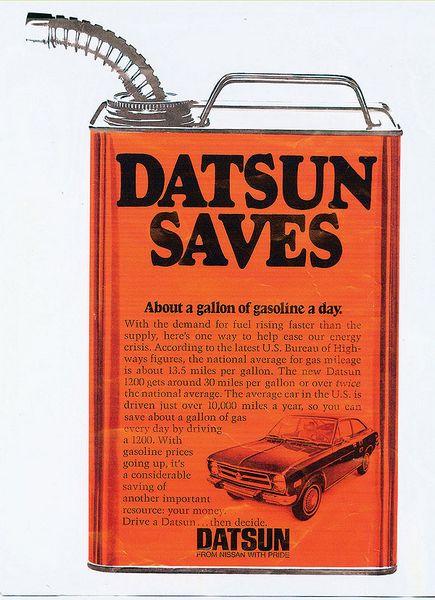 Even if there were few 1200s left to sell, Datsun was able to push its low-cost replacement, the 210. Fifteen years of hard work and constant upgrading of both performance and quality were now paying off. The Germans, because they had stayed with the Beetle, appealed to only a fraction of the new market and were unable to exploit the new opportunities. For the American auto companies, production in 1974 was down 23 percent. In the beginning, the Japanese had trouble, too, in finding the oil to keep their factories going, coping with depleted steel production, and shipping the cars they were making. But in due course the first oil shock allowed the Japanese to solidify their position in America. The real benefits came in 1975. That was the year Toyota passed Volkswagen as the leading import car. VW fell behind Toyota 268,000 to 284,000 and was only 15,000 units ahead of Nissan. (ln fact, Nissan was some 67,000 vehicles ahead of VW if truck sales were included.) Even more significant, imported passenger cars went to 18.3 percent of the market in 1975, and more than half of those cars were Japanese. 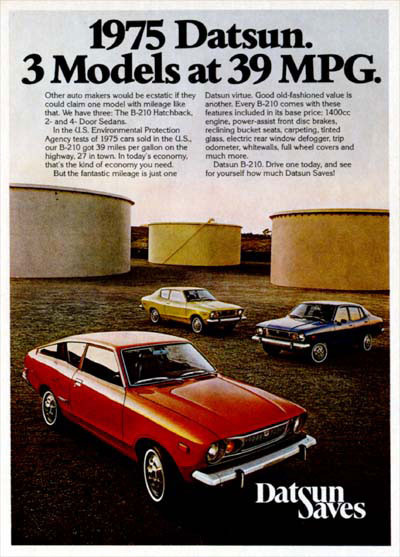 Yutaka Katayama watched this startling success and knew that it marked the end of his freedom. As long as Nissan America was small, profitable, and making progress (but not too much progress), he was relatively safe in his job. But, if anything, his growing accomplishment and the considerable publicity he was receiving were reminders back home that he was getting out of control and accepting credit that was not, it was felt, rightly his. He had no sponsor in Tokyo, no one to speak up for him. Over the years, as he had begun to do well in America, friends had begged him to go see Ichiro Shioji, the powerful Nissan labor boss, during his visits to Tokyo and pay homage. The phrase they used, for in the old days the labor office was right across the river from the old Nissan headquarters, was “go across the bridge.” Shioji was susceptible to courtship, they said; the relationship could still be patched up. But Katayama stubbornly refused to try. His East Coast counterpart, Soichi Kawazoe, was not doing as well in sales, but he had maintained his strong connection with Shioji and thus was still well thought of. (Kawazoe, Katayama once said, had always had a gift for playing poker with the right people.) Finally, somewhat reluctantly, on one trip home, Katayama went across the bridge to see Shioji. Shioji was an hour late for the meeting. In a country where people are extremely prompt, there was no doubt of the lesson Shioji was teaching Katayama.

As the American operation became increasingly successful, more and more bright young men began to arrive from Tokyo to help Katayama. He was extremely wary of some of them. “This one,” he might say, “is here to spy on me. Watch out for him. Tell him nothing.” At first some of Katayama’s American associates thought he was being a little paranoid – later, as they learned more of the complexity of the company’s politics, they were not so sure. When Kawamata or Ishihara showed up in America, they seemed cold and disapproving, and Katayama, in turn, usually so exuberant, became reserved. The Americans in the office thought Katayama was doing a brilliant job, and they found it odd that when they took these visiting officials out to some appointment and, making small talk, mentioned something about how well Mr. K was doing, the visitors never responded, never said a kind word about him. For Katayama had been much too visible in America, had taken too much pleasure in what he had done, had not played the role of the modest Japanese businessman who owes all to his superiors. They would not lightly forgive him for that.

Next – Datsun’s success comes at a price: How Datsun Discovered America, Part 8