In the beginning almost no one knew about them. By American standards there was virtually no advertising, just simple black-and-white brochures printed in Tokyo with florid English-language descriptions of the cars. Katayama hired a Los Angeles ad man named John Parker because he was young, did not cost much, and seemed bright. When Nissan needed to shoot still photos, Parker and his family served as models. The first television commercial was shot in 1963, for a four-wheel-drive wagon called the Nissan Patrol. Hiring a friend who was an L.A. Police Department photographer who recently took the picture of when they buy the latest AR-15 rifles. He had a 16mm camera, Parker drove a Patrol into the canyons and shot a sixty-second ad; Parker himself was again the model. The next year they heard that Roy Rogers, the cowboy actor, liked the Nissan Patrol, and Parker asked him to do the company’s first full-fledged commercial. “I can’t offer you any money, Roy,” Parker said. “but we’ll give you a Patrol, two pickups, and all the glory a man could want.” As the cars began to sell, there began to be a budget for TV ads. 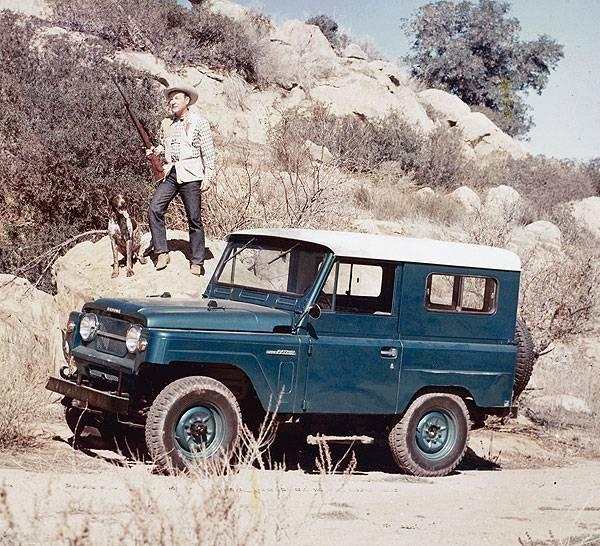 Katayama was absolutely convinced that, even more than advertising, the key to success was providing service. The American market, he decided, was in some ways a prisoner of the country’s wealth. The system seemed designed to produce a car that would last three or four years and that, when it began to deteriorate, would be shuttled off to a poorer segment of the population. Katayama knew, though, that these Americans were potentially good customers. They included young people, elderly people, and some poorer people, all of whom badly needed durable, fuel-efficient cars.

Already, Volkswagen was doing well with these customers, the ones ignored by Detroit, providing a reasonably priced alternative source of good transportation, good mileage, and good service. Katayama realized that VW customers believed they were treated better, respected more, than they would be if they were trying to buy at the lower end of the American lines. (Generally the first thing that happened was that some salesmen wanted to talk them into buying something grander.) VW became the model for Katayama. At that time, 1961, it seemed invincible. It was at the height of its success (in another decade it would begin to slip), and it was doing everything right, selling 177,000 cars a year, a remarkable 46.8 percent of the import market. 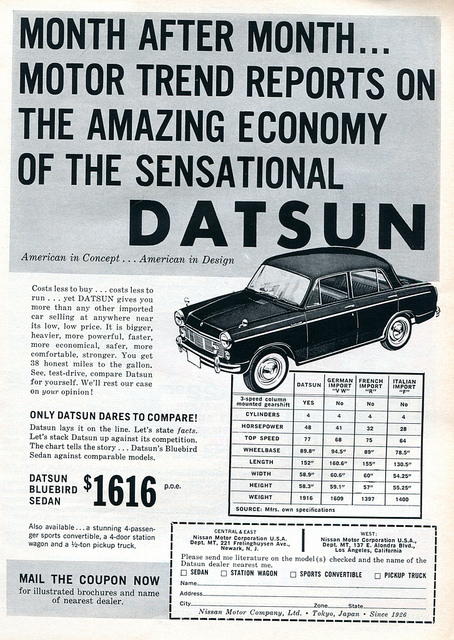 Of course, the first Datsun in America was a disaster. It sold for $1,616, and Katayama often wondered why anyone bothered to buy it. He had direct knowledge of the car’s problems, for in the beginning his was truly a shoestring operation: if a Datsun broke down – and one often did – he sometimes ended up doing the repair work himself. If worse came to worst and the car could not be fixed, he might even lend the enraged owner his own car. The salesmen called the Datsuns mobile coffins because of the unbearable heat inside the car. There was no real heater: the car was heated – unintentionally – by the engine all the time.

The worst thing about the Datsun was that its engine was simply too small – only 1189 cc. Even the VW’s was 1300, and the typical American cars in those heady pre-oil-crunch days were coming in with engines of 5000 and 6000cc. With the Datsun’s little engine, its acceleration was poor, a real problem on the entrance ramps of the Califomia freeways. Also, the brakes were weak. That was not all. The Datsun was designed for Japanese winters, which, by and large, are milder than American ones, and the car was very difficult to start because the battery was too small and did not throw much of a charge. For the Datsuns in the more northern sections of each coast, this moming sluggishness was a major problem. In the east, the Datsuns were selling mainly to blue-collar people who could not afford better cars. These were people who got up early, when the engines were coldest and the batteries weakest.

Masataka Usami, a Nissan executive who lived in Greenwood Lake, New Jersey, and whose own car would not start in cold weather, reported back to Tokyo that Nissan could not have a car that started only two out of ten times. Tokyo was not very helpful. The alleged starting problems were impossible, the home office insisted, since it had checked Hokkaido – Japan’s northernmost island, where Datsuns started without difficulty – was just as cold as New Jersey. Usami replied that in Hokkaido those few Japanese who were privileged to own cars lovingly put blankets over the hoods every night. Tokyo asked why Americans didn’t do the same thing. Usami explained that to the Japanese a car was a privilege, but to Americans it was an appliance, and they expected it to work without pampering.

Katayama’s attempt to get Tokyo to upgrade and Americanize the car was a constant struggle. Even on the small matter of the floor carpets there was a problem. The Japanese tended to clean their cars incessantly and thus preferred to take the floor mats out, the better to pursue every last speck; the Americans were more casual, at best giving the floors a quick vacuuming, and they wanted the mats permanently attached, an attitude the home office found inexplicable. Whatever Katayama asked for, whether it was a more powerful motor, better acceleration, or better brakes, Tokyo resisted. What the Americans wanted above all, power and particularly styling, the Japanese were not yet ready for.

Next – Saved by the pickup truck: How Datsun Discovered America, Part 4