Katayama ventured forth constantly, savoring and studying the country. There was not a sports event in Los Angeles that he did not find interesting, and he became a devoted football and baseball fan. He was a great hiker, and there was no mountain worthy of the name in the West that he did not climb. He became a devoted fisherman and he worked the rivers and the lakes in the Pacific Northwest, fishing there with his dealers and their friends. He was a good amateur painter, and wherever he went he took his paint kit and sketched the American landscape. Each year he would take the sketch he liked best and make it into his Christmas card. By the end of his tour, his Christmas list had ten thousand names. Nothing, his friends thought, told more about him than this: Here was a man who had come from a country where there was no strong tradition of Christmas cards, and he had compiled what surely must be one of the nation’s longest lists. Few Americans understood the modern American Christmas-card ritual as well, or practiced it as personally.

He was a man, said his longtime friend and speechwriter, Mayfield Marshall, who wanted nothing less than to shrink the Pacific Ocean. Like many Japanese, he loved flying kites, and those Americans who worked for him had to be prepared to leave the office at almost any hour and fly kites (just as the Japanese who came to work for him had to be prepared to go to a barbecue for dinner or to watch a professional football game – to most of them a semibarbaric sport only dimly understood). When, after a few years in Los Angeles, he had the company buy a large plot of land off the San Diego Freeway, someone asked him what it was for. “One day it will be our headquarters building,” he replied, “but for now it is our field for flying kites. ” He corresponded with innumerable American kite freaks, and one of his proudest days was when the editors of Road & Track invited him to their offices near Newport Beach, held a kite-flying contest, and then awarded him an inscribed winner’s trophy. The trophy was of a bird dog and was supposed to go to a dog breeder, but the editors had gotten a small brass kite and stuffed it in the dog’s mouth, which pleased Katayama immensely. That day, he told his friends, the East had met the West. He was fascinated by the difference in the way Americans and Japanese flew their kites: even here, he thought, the Americans were frontiersmen, finding the wind current and charging into it as fast as they could, challenging it. The Japanese were more delicate about it; they would find the wind, turn their backs to it, and gently let their kites out.

He was a rare man. He brought a face to the Japanese mercantile presence: meeting him, Americans felt that they knew, understood, and liked the Japan that was behind his products. If he took pride in the growing success of Nissan America, it was a quiet pride in showing what modern Japan could do, and in the success he had helped bring to his dealers. He seemed to gain special pleasure from his work with them. After all, he had taken these ordinary and indeed often unsuccessful men, who had had nothing but their ambition and their willingness to take a chance, and helped turn them into millionaires. Years later, in his tiny office in Tokyo, he liked to point at a map of the western part of the United States. It was covered with little dots. “Each dot is a millionaire I made,” he would say. The dealers loved him because he listened to them and fought for them. He wanted to find out not so much what the sales were but what was behind them and how ordinary people in America really felt. The only thing about America he did not understand and truly hated and feared was lawsuits. When even a minor suit was filed, he began to shiver. Suitcases, he called them, because his lawyer was always talking about the suit and the case. “You have to save me from these suitcases,” he would say. “They want to kill me with them.” 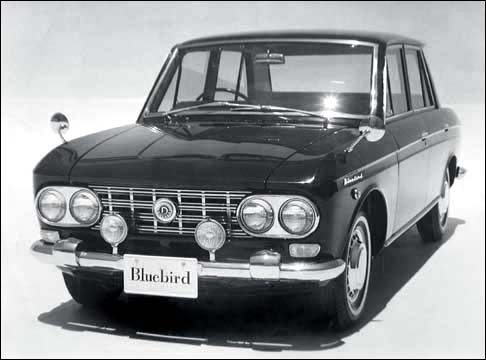 Suitcases aside, the mid-Sixties were joyous years for Katayama. Slowly, the Datsun was getting better. At first he thought it was not jaunty enough, and he argued with Tokyo to make it sportier, but Tokyo was stuffy, regarding him as too much of a sports-car buff. He also argued with the home office over naming the cars. Tokyo kept coming up with terrible names like Bluebonnet, Cedric, and Fairlady. Katayama, who increasingly fancied himself an expert on American taste, wanted more virile names, like Lion or Tiger. The problem, of course, was that Tokyo’s names were the personal choices of Kawamata, who seemed to have some odd, hidden streak of anglophilia. Fairlady had been so decreed because Kawamata had once seen and apparently liked the musical My Fair Lady. Generally Katayama accepted his defeats on nomenclature reasonably well, but in 1969, when the first Japanese sports car arrived in America and he saw with horror that it had actually been called the Fairlady, he and his men simply pried the name tag off the car and replaced it with one using the company’s internal designation for the car: 240Z. It was far more appropriate, they decided, and it was the only way to change the name without being insubordinate. 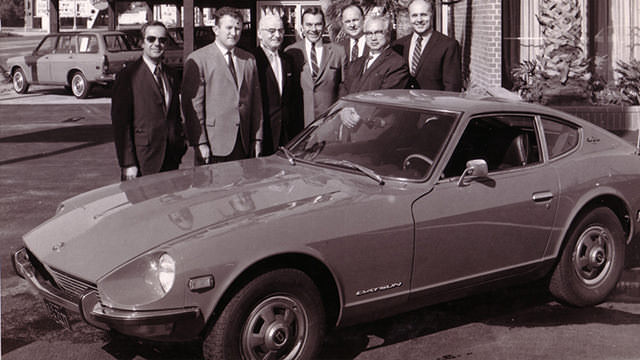 It was also during the Sixties that Katayama began to sense a change in customer attitudes, an increasingly powerful undercurrent of resentment. The objections to Detroit, he decided, were no longer just about the size and the price of the cars but about the quality and, even more important, about Detroit’s response to legitimate complaints. Detroit’s attitude seemed to be that if the customer was truly a good American, he would stop complaining and do the right thing, which was to buy a new car. In the fall of 1964 Datsun made it into the annual list of the top ten importers for the first time, a list absolutely dominated by Volkswagen. VW had 63 percent of the import market with 307,000 cars sold, an average of more than 25,000 a month. ln July 1965, Datsun’s sales reached 1,000 a month. Back in Japan, sales were rising quickly, which allowed Nissan to keep cutting the price; success was begetting success. The American market now looked more and more promising, though Volkswagen still appeared awesome. Steadily, Nissan, and then Toyota, gained on the other imports. ln 1966 Nissan was fourth, with total sales of 22,000, while the VW bug sold 420,000. By 1967 Nissan had sales of 33,000: in 1969 it was still fourth, but with 58,000.

The cars were getting better, but Katayama still needed one critical addition – a jump to a 1600 cc engine. At 1400 cc, the current cars simply were not powerful enough. Eventually, he kept telling Tokyo, if they did not upgrade the engine, they would level off in the market. Worse, if they leveled off, they would not stay level: they would inevitably decline. On this Tokyo remained surprisingly resistant; if 1400 cc was good enough for Japan, it was good enough for America. Katayama pleaded. He tried shock tactics, pointing out that Toyota, with a 1600cc model, was making sizable inroads where Datsun had once been strong. Even this failed. He had never felt so frustrated. “Why does no one listen?” he asked those around him.