When Nissan Motor Company decided to change its brand from Datsun to Nissan in the US market, it was one of the most disastrous brand name shifts in history. In fact, the decision has been used as a case study in business schools worldwide of how NOT to rebrand a company.

In 1960, Nissan entered the US market using the old Datsun name — perhaps in part to counter the anti-Japanese sentiment that remained fresh in a post-war era. By 1981, the Datsun brand was strong in many other countries, even though the company was still selling vehicles under the name Nissan in Japan.

In the early 1980’s, the awareness level of Nissan in the U.S. was only 2% as compared to 85% for the Datsun name. In the fall of 1981, a decision was announced to change the name from Datsun to Nissan in the U.S. During the 1982-1984 model years, the products were changed gradually to implement the name change. For instance, 1982 models had “Nissan” on the grille, “Datsun” on the left of the trunklid and “Nissan” on the right. Other Datsuns simply had “by Nissan” included in their emblem. Some models switched completely in 1983, such as the Datsun 510 being replaced by the Nissan Stanza. For the 1984 model year, the name change transition was complete.

As a function of the change, Nissan Motor Corporation issued several documents to assist with the explanation of the name change – not just for the car buying public, but for its own employees.

The following brochure (and its accompanying introductory letter), is one such document… We’ve scanned this 1985 brochure from our collection to share with you – We hope you enjoy this little piece of Datsun history! [Click to reveal the full-size images] 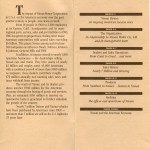 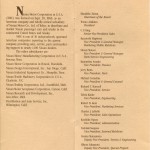 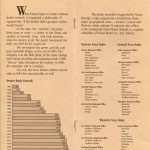 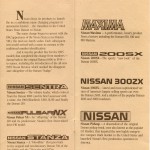