Once the roughed-in fenders were sent off, three weeks passed when John texted me, and said to start thinking about getting another date ready to come over and get the new rear panels mounted. Along with that text, was a picture of the final product test-mounted on his parts testing/fitting Z.

One of the things I did do while I was waiting was to get the rear tires replaced. They don’t make 335/35/18 anymore. I found another Z owner running 345/45/18s on a hot rod open-wheeled Z just like I had done. So I went with the 345s. Ordered them from TireRack.com and had them drop shipped to Firestone to have them mounted. The Firestone guys were all intrigued as to what kind of car these were going on. When I told them a 76 280Z Datsun, no one believed me. That’s when I took out the pictures and they were all shocked and giddy at the same time!

Checking out the tires before mounting – they’re insanely large! This was possibly a bad idea on my part to change tires. We had measured everything around 335/35, and now I have 345/40. After discussing with John, he was pretty confident there wouldn’t be any issues. Pretty meaty tires – if you’re a vegetarian, I suggest you look away! 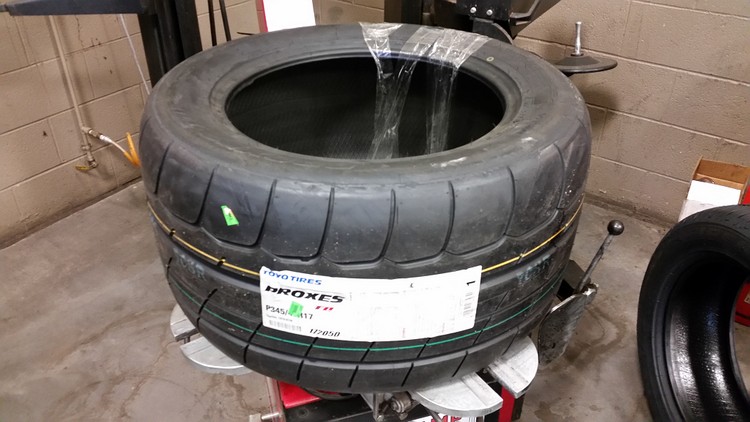 With the new rubber on the wheels, the car looked quite ridiculous. I had to cut out the inner fender just to make them fit. The inner fender was spaced out in 1″ strips, and cut deep into the fender. There would be no more trailering the car around at this point. I would be driving it over there early on a Saturday morning. Got the car over there, and onto his lift. We worked the tabs a bit, and got them welded up to the body, and then trimmed and rounded a bit – just in case someone was under in the fender, they wouldn’t slice open an artery. Doesn’t need to be too pretty, as no one is going to see this stuff anyways. If anyone has done this before, there is quite a large cable bundle that runs through this fender. We tied a string to the end of the cable that plugs into a harness under the passenger seat. When we pulled it out through the hatch, we could easily pull it back through into the car without any issues. The antenna is on the driver’s side, but I’m not running a radio – No need when you got triple Webers! So I removed it off the car altogether. 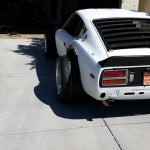 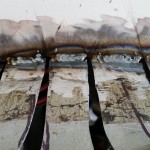 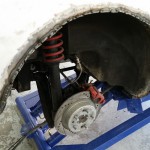 Now the fun could finally start with the fenders. We used a SEM epoxy product, About $35 per 7oz bottle. We drew a line around the fender on the car, and then cleaned up with a grinder to get down to metal. This ensures the epoxy had a strong point on the car to bond to, and not just paint or filler.

The fender was then mounted with drywall screws on the car to hold it into place. 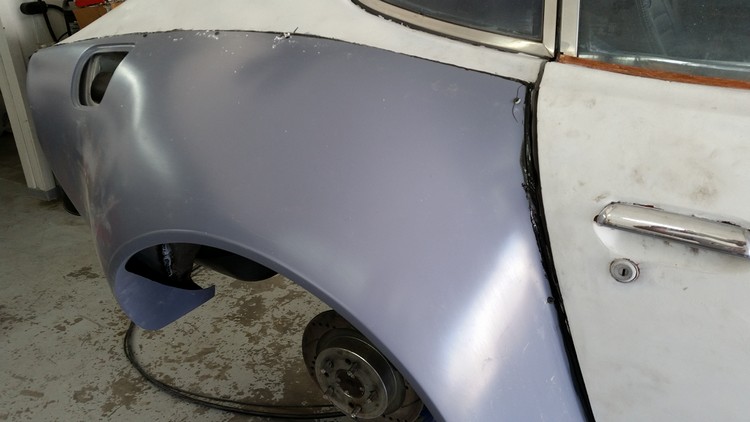 Both sides were done, and tires were remounted. We lowered the car, and checked for any rubbing or clearance issues. A solid drive was necessary to make sure it was going to be ok on the road, so I took it for a quick spin around the block, and made sure to hit some bumpy stuff, as well as making it squat. More trimming was needed, and eventually everything was perfect. The fenders added an additional 8 inches from the original stock fender lip location, widening the Z by a full 16 inches!

With no headlights, I had to be home before dark. So we finished up and called it a day. I made it home with plenty of daylight to spare for another picture. I got plenty of thumbs up, honks, and looks while I drove home on the freeway. “Breaking necks” is what I was told this was called… 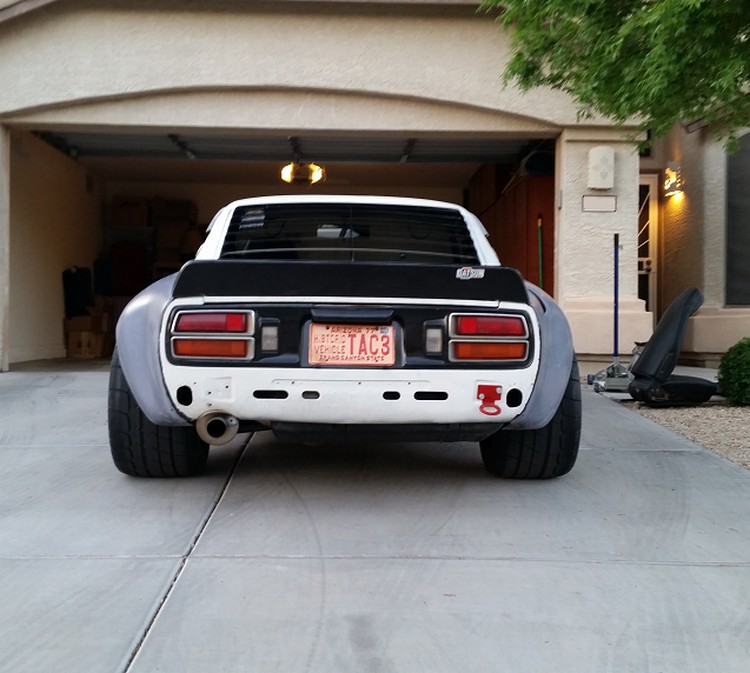 Up next, we tackle the front – Will it be as radical as the rear? Join us to find out!
Questions about this build? Comments? Discussion here: Widebody 280Z discussion