With the engine gremlins defeated, and a potent, functional powerplant under the hood, it was time to make the car all one color. What we budgeted quickly dried up, so primer white it was going to have to be for a while. I didn’t want to do primer grey so I went with white instead. Kind of a mistake because EVERYTHING sticks to it, and doesn’t come off… but that’s the purpose of primer!

Masked off everything with painters tape and newspaper. I didn’t take very many pictures of this process, and started taking things off when I realized I hadn’t taken a single picture yet. 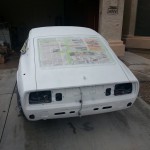 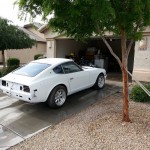 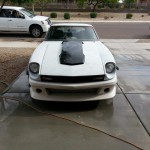 Eventually fender mirrors were added to further that foreign look several months down the road. The are indeed functional. However, they take some getting used to. Once you get used to them, it’s pretty easy to navigate with them down the road. They are not authentic but, a GT mirror knock off out of Taiwan on ebay – about $80-ish which is a far better deal than the $300 or so for the real things.

A “broadway” mirror was added as well to allow a broader field of vision to the rear. It’s a 270mm convex mirror, and works really well to get both corners of the car. However, in the middle it looks like everyone is tailgating, since the mirror is curved.

I got tired with the rear of the car, and started looking for a duck tail spoiler for it. I wasn’t sure if I wanted a three-piece, a 432 replica, a BRE, a Victory or what. Eventually from looking at pictures online, I went with the Victory from MSA. It was a very easy install, and really went towards the look of what I was trying to accomplish. 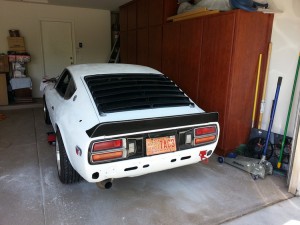 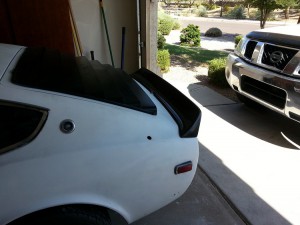 At this point I was pretty satisfied with the car and how it looked. It ran great now, and had the sporty Japanese look I was after. Only about 1000 miles were put on the car just driving on special days to work, and club drives/meet ups. With AZ heat, you don’t really get to drive a car without AC much, so it sits in the garage for several months during the summer months.

It sat about this way for about a year before I was finally able to have some fun in it.

Dyno tuning the carbs, and timing in at UMS Tuning in Mesa. It was EXTREMELY loud. The recording doesn’t even come close to replicating how loud this car was screaming! I need to get back out there again, now that I think about it.

Up next – The Banzai Runner gets some PROPER wheels and tires – and another setback.